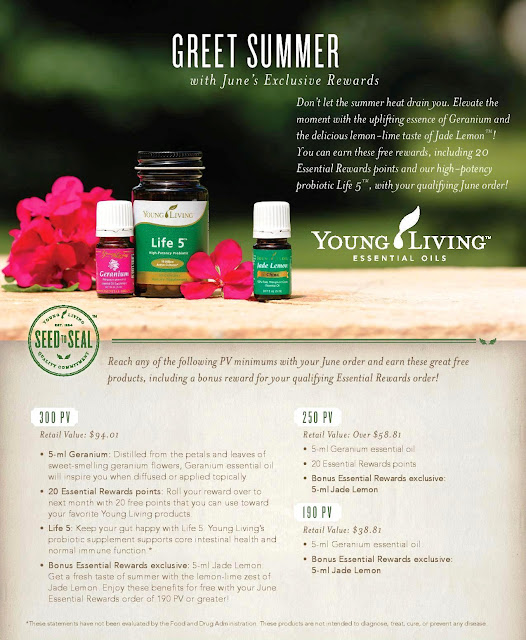 Don’t let the summer heat drain you. Elevate the moment with the uplifting essence of Geranium and the delicious lemon-lime taste of Jade Lemon™! You can earn these free rewards, including 20 Essential Rewards points and our high-potency probiotic Life 5™, with your qualifying June order! Reach any of the following PV minimums with your June order and earn these great free products:

• 5-ml Geranium: Distilled from the petals and leaves of sweet-smelling geranium flowers, Geranium essential oil will inspire you when diffused or applied topically.

• 20 Essential Rewards points: Roll your reward over to next month with 20 free points that you can use toward your favorite Young Living products.

Get started on your amazing essential oils journey by logging on here:

*These statements have not been evaluated by the Food and Drug Administration. These products are not intended to diagnose, treat, cure, or prevent any disease.

Posted by Raven Hannah at 1:37 PM No comments: 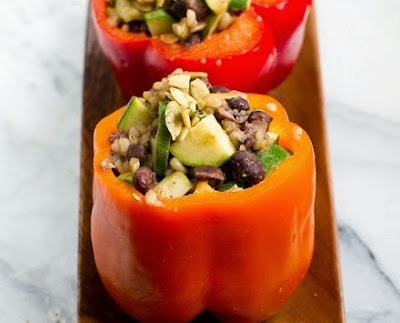 Summer is an ideal time for grilling outdoors and for spending quality time with family and friends. If any of your gatherings include a potluck, try to focus on the many in-season fruits and vegetables to make your dish(es) a hit. Some ideal candidates for grilling include bell peppers, asparagus, zucchini, and mushrooms. But spring and summer fun does not have to end with grilling. Try this stuffed pepper with squash and black beans recipe for your next get-together.

If you have leftover rice and cooked black beans on hand, this recipe can be made in just a few minutes. Or you can slice up the red peppers, add some shredded lettuce, and make a salad out of it.

Combine the rice, beans, squash, green onions, pepitas, garlic, oregano, vinegar, lime, salt, and pepper in a large bowl. Fill the peppers with the squash, rice, and bean mixture. Top with salsa, if using, and serve.

Source: Power Foods for the Brain by Neal Barnard, M.D.

Posted by Raven Hannah at 12:25 PM No comments: 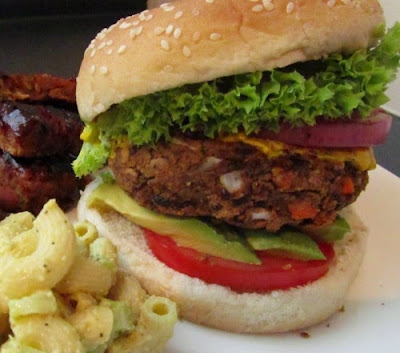 You can still eat plant-strong during outdoor grilling season, at gatherings with family & friends, or whenever you want an easy to make, healthy burger!  This zesty black bean burger is sure to fire up any celebration!!

Pre-heat grill, or fire up charcoal, or heat a grill pan over medium-low heat.

Transfer mixture to a large mixing bowl, add the bread crumbs. Season with salt and pepper, to taste, and mix until well combined.

Divide mixture into 4 portions and form into patties. Place on hot oiled grill over medium-low heat and cook about 7 minutes a side or until heated through. Toast hamburger buns on a grill. Place a burger on the bottom of each bun. Top with lettuce, tomato, and your choice of condiments.  Cover the burgers with the top of the bun and serve.

*   *   *   *   *   *   *   *
Raven is a Holistic Wellness Consultant and Life / Spiritual Coach specializing in spiritual & energy healing, whole food plant-based nutrition, as well as healthy, wholesome, natural lifestyle information, products, resources, recipes, organic & Earth-friendly advice, and lots of "how to" fun stuff to make natural living a worthwhile journey for you and your pets!

Posted by Raven Hannah at 12:26 PM No comments:


From acres of sweet lavender in Utah to rows of fragrant eucalyptus trees in Ecuador, our global farms are emblematic of the purity and quality of everything we do.


Visit the brand-new SeedtoSeal.com for a brand-new, immersive Seed to Seal experience where you can learn about our farms, our production process, why quality matters, and much more. Discover Seed to Seal for yourself.


Following is an update on some of Young Living's Farms around the world:

The largest herb farm and distillery in the world, our lavender farm in Mona, Utah, features nearly 1,400 acres of fragrant herbs and is open to visitors year round.

The farm continues distilling Juniper. Also, employees at the Mona farm have been busy preparing and planting for Spring.  As part of the greenhouse operations, Lavender seedlings are being transplanted to prepare the Lavender fields.

Previous to Young Living’s 1992 purchase of the land for the St. Maries farm, this area had never been exposed to chemicals, pesticides, and man-made fertilizers. This pristine condition makes the 200 acres of soil perfect for the cultivation of botanicals such as Melissa, Lavender, and Tansy.

The fields at the St. Maries farm continue to be dormant and inaccessible due to mud and saturated ground conditions caused by rain. Work in the fields should resume within the next weeks, weather permitting.

The Highland Flats tree farm is located near the small Idaho town of Naples, less than 50 miles from the U.S. ~ Canada border. Since 2000, the 250-acre farm has hosted the annual Winter Harvest, where distributors join in harvesting blue spruce, balsam fir, red cedar, and pine trees. Each Spring, distributors also participate in the Spring Planting, an important reforestation project that replaces the harvested trees.

Highland Flats also played host for Winter Harvest through the end of February. Even while facing winter road restrictions, a record-breaking 2,800 liters of oils have been produced since November 2014.

Workers at the Highland Flats farm have started distilling blue spruce again, and the floral water recirculation system is also up and running. Workers from the St. Maries farm are in Highland Flats helping to plant balsam fir saplings, as well as shipping trees that will be planted on other farms.

Boasting nearly 2,000 lush acres of farmland, our Ecuador farm’s fertile ground and year-round growing season support an abundance of Palo Santo trees, several new high-oil-content plants, along with ample cultivation of Lemongrass, Ruta Graveolens, and many more local plants and herbs. This farm is also proving to be the perfect place to harvest oils that are in short supply throughout the world, such as Helichrysum, which is renowned for its restorative properties.

Employees at the Ecuador farm have been harvesting and distilling Ylang Ylang and Mastrante, planting Dorado Azul and Oregano, and distilling Ocotea and Palo Santo. 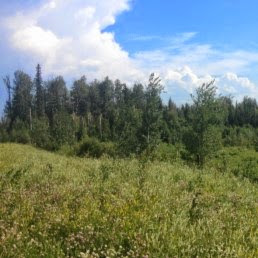 As one of our newer farms, we are excited to announce that the distillery is ready to fire! An all-natural water conditioner that was engineered to accommodate the organic farm and distillery has also been installed. This farm was created in an effort to prevent future out-of-stock issues by distilling black spruce, which is a key ingredient in many of our oil blends.

UPDATE:  The boiler and distillery are up and running, already producing 650 liters of black spruce! Because of this farm, we will not have to worry about our future Valor quantities ever again. In addition to black spruce, the farm will also soon grow einkorn grain and blue yarrow.

By cultivating, harvesting, and distilling many of our essential oils on our very own farms, we have the unique ability to verify perfection at every step of our process. Combine this with our extensive laboratory testing and independent audits, and it’s no wonder that we routinely exceed our own industry-leading quality standards. Our commitment to quality doesn’t stop there, however. Inspired by the fields, forests, and jungles that surround our pristine farms, Gary Young is constantly discovering new botanicals and essential oils, helping us bring more of nature’s greatest gifts to people everywhere.

Get started on your own amazing essential oils journey here:

Posted by Raven Hannah at 3:09 PM No comments:

Essential Oils in the Ancient World ~ Part I


Essential oils are gaining worldwide recognition for their versatility, but their use is not necessarily new. The use of botanicals as healing agents is a long-standing practice throughout human history. In fact, essential oils and other botanicals have been used in wellness practices as early as 3500 B.C. That’s prehistoric!
This week, we're exploring the use* of essential oils in ancient Egypt, their increased exposure, and how Young Living’s Seed to Seal® process is the evolutionary pinnacle of thousands of years of essential oil production and use. First up, let’s explore a culture where some of the first recorded uses of essential oil precursors began: Egypt.

Ancient Oils in Ancient Egypt
The fertile soil around the Nile River became a source of life throughout Africa. The kingdom of Egypt grew around the delta of the Nile, and its name became synonymous with power, wealth, and technological advancement.

The abundance of food in Egypt, owed to the richness of the land, allowed for the development of a rich culture, which included some of the earliest advances in writing, agriculture, urbanization, and central government. In addition, this progressive culture was the perfect stage for innovation in herbal medicine.

One of the first recognized compilations by ancient healers is called the Ebers Papyrus. Although it dates from approximately 1500 B.C., it is believed to have been copied from earlier texts. The scroll contains recipes, ceremonies, and other information that Egyptians deemed worthy of preservation.
But, of course, the most famous Egyptian use of aromatic botanicals is in mummification. In preparing the bodies of the deceased for burial, embalmers used various botanicals such as cinnamon, resins such as frankincense and myrrh, and an early form of cedar or juniper essential oil.

With such cutting-edge advances, Egypt’s international renown drew researchers from neighboring countries, leading to expanded use of botanicals in everyday life. Stay tuned for our next post, as we discuss how Egypt’s influence precipitated the spread of essential oil wisdom throughout the ancient world.

*Information regarding traditional use is for informational purposes only and is not based on modern science, nor should this information be construed as expected results from use.
Posted by Raven Hannah at 6:06 PM No comments: