A recent report from the Environmental Working Group highlights the top sugar-laden cereals. Honey Smacks dominated the list with 15 grams of sugar per serving. While it’s fashionable these days to attack sugary cereals, sugar is hardly the most dangerous thing in your breakfast bowl. That dubious distinction goes to the milk.
For starters, milk itself is high in sugar. While the top five cereals on EWG’s list all had between 14 and 15 grams of sugar per serving, milk was nearly as high with 12 grams of sugar in a cup of skim milk. One cup of chocolate milk has almost 24 grams of sugar. 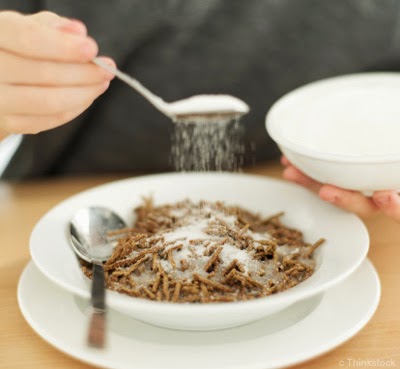 What is considerably more worrisome is the fact that milk is linked with cancer ~ particularly prostate cancer. In international comparisons and in several prospective studies, men consuming the most milk had a substantially higher risk of prostate cancer, apparently due to milk’s effects on male hormones.
However gals . . . . don't think you're off the hook either.  When I was diagnosed with ovarian cancer in my late 20s, I was floored.  I was a happy, healthy, on-the-go vegetarian, but I was still consuming dairy.  After a few go-rounds with this terrifying disease, and no doctors who were willing to remove my ovaries due to my age, the cancer eventually spread. Though it took me a while to make the connection, I eventually gave up dairy for good (and every other processed food that contained animal products) and went completely plant-based.  Since there was not a history of ovarian or cervical cancer in my family (that I was able to uncover), it was assumed by the physicians who treated me back then that it was perhaps something I was exposed to as a child (toxic chemicals), and / or it was connected to diet.
Here's the skinny . . . . you don’t need milk! Studies show that milk does not actually help build strong bones, and the protein in milk can easily be obtained from other sources. One cup of oatmeal has 5.5 grams of protein ~ as well as 4 grams of fiber. Quinoa also makes an excellent breakfast, and one cup of quinoa contains has 8 grams of protein and 5 grams of fiber. Making a few servings of quinoa or a pot of oatmeal, and then sticking them in the refrigerator, makes them as easy as cold cereal on a frenzied morning. And you can sweeten them both with fruit and a little bit of agave if you’re so inclined.
That's just a couple of breakfast ideas.  There are dozens of ways to get the purest forms of protein and calcium and minerals and everything else you need by consuming a healthy plant-based diet for breakfast, lunch, dinner and snacks!
So, go ahead and ditch the milk . . . . we’ll all be better off in the long run.

*Portions of this article excerpted from PCRM